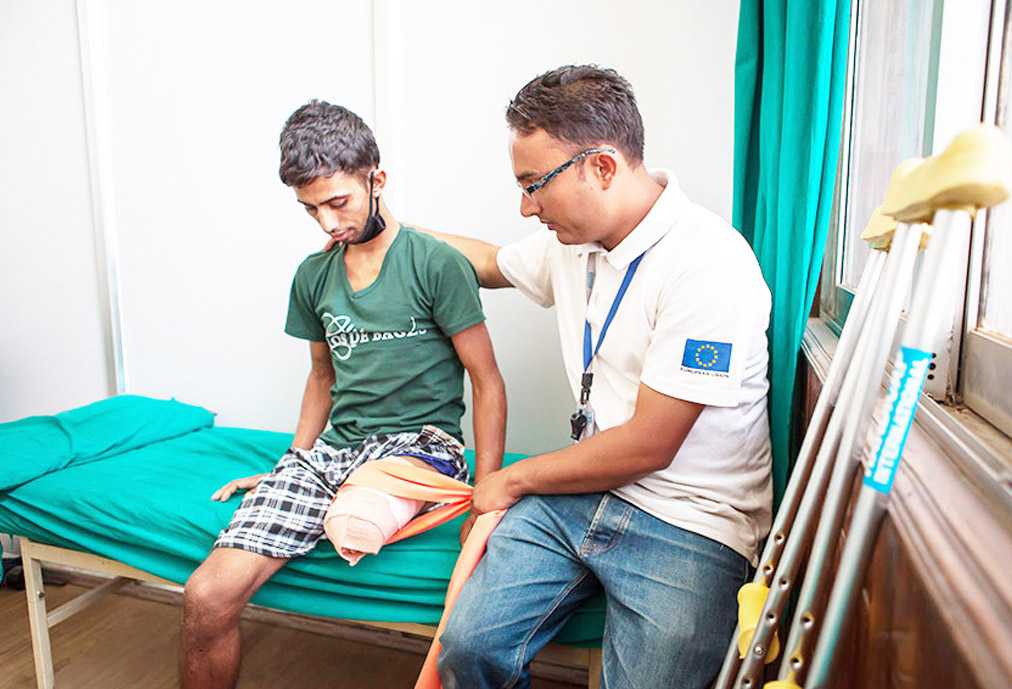 1) Introduction- There are many articles where the role of physiotherapy in disaster management is highlighted internationally. It’s important to go through those articles and learn how a Physiotherapist contributes in activities before and after a disaster. Having advance knowledge of the possible roles and responsibilities in disasters is called individual preparedness which can be done by referring to the resources available on the internet. However, disaster preparedness has to be at all the levels viz. personal, family, community and the country. Nepal faces disasters like floods and landslides every monsoon due to its complex topographical structure. Various studies in previous years ranked Nepal as one of the country prone for seismic hazards. As it is well known by now, Nepal faced catastrophic earthquakes on 25th April and 12th May 2015. 8856 people were dead and 22309 were injured. Proper injury management and rehabilitation is an important priority now and physiotherapists form an integral part of this function. With the live experience of recent earthquakes, it has been realized that the working scenario for physiotherapist during disaster time is completely different from the usual scenario because:

2.1  Preparedness phase- A disaster like earthquake is inevitable but a lot can be done to manage injuries so as to prevent the complications and long term disabilities. Post disaster situation is always stressful with a huge rush in seeking health care. Therefore, there should be clear mechanism defined beforehand on how the physiotherapists should be mobilized nationally so that injured survivors get timely care. To take care of the acute human resource shortage, mapping of the physiotherapists in particular pocket areas or clusters can be done. Whenever disaster occurs, it becomes a national issue and government takes the responsibility to mitigate the consequences. In recent experience, the government committed to provide free health care to the injured survivors. It means that the flow of people is concentrated towards the government owned hospitals but it doesn’t mean that private facilities were not used. In the recent earthquake, people were rescued to nearby hospitals either private or government but later on they were referred to government hospital for long term care. Therefore, it’s important to include government and private hospital physiotherapists in preparedness. Very importantly, it’s vital to define the care pathways and referral mechanism at the period of disasters so that no body is deprived of early rehabilitation services. The government line agency (ministry) and professional associations should be at the lead level so that preparedness has better validity and can be easily converted into the actions in case of disaster. Another important aspect of the preparedness is related to injury management and in-patient rehabilitation. Physiotherapist should be always conditioned to handle cases in panic situations like immediate post disaster scenario. Therefore appropriate training to handle the cases in such situations is a must. For example in Nepal there has been the capacity building on injury management and rehabilitation. On the other hand, mock drill sessions are equally important and physiotherapist should be a part of it. Frequent mock sessions are the best way to condition health care professionals for better response in injury management and early rehabilitation care.

2.1.1 Stock piling of rehab aids: Utilizing the lessons learnt from other nations earthquake, in Nepal there had been some preparedness work which was led by ministry of health along with the support from other non-state organizations like World Health Organizations, Handicap International and so on. So, the rehabilitation equipment (for the delivery of physiotherapy services) and assistive devices (mobility aids, Orthosis and prosthesis) were stocked piled prior to earthquake. These equipments were accessed and distribution started from the first day of the earthquake to needy people. But it’s also very important to develop the consensus among the preparedness stakeholders on the pathways of assistive device services. After the disaster many organizations not having enough technical expertise in rehabilitation keep on coming in the hospital for the donation of these sort of devices. These devices are often donated to the hospital central pharmacy stores or in many cases simply prescribed by other medical professionals without any links with existing physiotherapy unit in hospitals. This may result into the delivery of inappropriate devices without the proper user training by physiotherapists. Hence assistive device care pathways should be defined including the role of physiotherapist so that a survivor receives holistic care.

3) Role at the time of disaster- Securing safety is the top most priority here. If we are handling the survivors, it’s important to place them at the safer zone first.  Another important aspect is that patients should not be detached from assistive device in such emergency situation as they are the mobility means to secure safe position.

3.1 Case study:  experiences of second earthquake:  There was a woman with bilateral lower limb crush injury sustained during the first earthquake. The plan was to teach her user training before the delivery of wheelchair. Lifting her in hands together with her husband assisted transfer was being done from bed to wheelchair. When she was being lifted, all of a sudden the second earthquake with the magnitude 7.3 Richter scale came. Everyone including her around the ward located at the 3rd floor started panicking. Well that was a quandary state for us either to leave her there and secure our safety first or place her on nearby wheelchair and move her to safe position together with us. As the building was shaking hard, at first we tried to put her back on her bed and secure our position but all of sudden we made a decision to put her back on the wheelchair. Finally, we were able to secure her in time at the downstairs ground. At the same time, a young boy who was propelling the wheelchair down towards the ground was in huge state of fear because he lost his both legs above the knees in the first earthquake. In fact he was able to secure the safe transition from his bed to the downstairs ground by himself. Huge cheers to the wheelchair that acted as the mobility medium and user training skills provided by the physiotherapists just few days back. From both the cases, securing patient and yourself comes together in case a disaster comes during the duty time. On the other hand proper user training on how to propel the wheelchair on the same hospital ramp helped the young boy to transfer himself from the bed to downstairs. I still remember the boy saying, “I would have gone into shock, if there was no wheelchair and propelling skills with me. Both helped me to secure the safe position”. Isn’t that an immediate impact of the work that a physiotherapist did?

4) Physiotherapy in post disaster situation: Each hospital should have the mass causality management (MCM) plan defined before; in fact it should be the part of preparedness program for disasters. In this plan there should be clear cut mechanism defined with strategy to mobilize the existing resources of hospital. The plan should also define which could be the possible agencies to seek extra support for the additional resources required. All the hospital staff including the physiotherapist should be involved while making the MCM plans. To be very practical, the whole MCM plan for a hospital is the combination of MCM plan of its different department that includes the physiotherapy unit too.  In the first few weeks after a disaster like earthquake, the priority of care goes heavily on in-patient department but it doesn’t mean that outpatient should be understaffed because focus should be also given for other regular patients visiting the outpatient departments.On the another hand MCM plan of the physiotherapy department should also have clear cut answers on what is the capacity in terms of human resource and equipment that would serve the scientific basis to seek help from other agencies. The head of physiotherapy department together with subordinates should be the goal owner but it is equally important to define the coordination mechanism with doctors and nursing unit so that interdisciplinary approach of care is ensured even in disaster time. Last but not the least there should be defined mechanism for referrals to possible step down facilities because most of the injured people may not be having a place to live in a disaster scenario like earthquake. This should be defined by ministry in collaboration with other stake holders.

4.1 Role of physiotherapist in injury management and rehabilitation:

Triage team:  In simple words, the triage is a quick assessment method to trace the severity of health condition and determining the priority for medical management. In a situation of disasters this method is often adopted to promptly manage the high case load in hospital. The prompt categorizations of the injured cases after the disaster facilitate the medical team to focus on the management needs. The physiotherapist is one of the triage members provided that the sufficient training has been received beforehand.

As a part of interdisciplinary team physiotherapist are usually responsible for,

Depending upon the severity of condition the management can be short, medium and long term. But the overall objective of the management should be focused on,1) Prevention of long term disability 2) Continuous rehabilitation and follow up care of survivors who unfortunately acquire long term disability like spinal cord injuries, head injuries, Amputation and other similar injuries.

5) Role of professional associations of physiotherapists: Professional associations in less resource settings are usually attempting to convince the government for the upliftment of the rehabilitation services in a health system. Even though occurrence of disaster is a sad incidence but it’s also an opportunity for professional associations to establish powerful impressions and significant way forward for health related rehabilitation in government health system. From the experience of recent earthquake, it has been evident that professional associations can really link the health facilities with the qualified national PT volunteers till the time of formal recruitment. Nepal is lucky that the disrupted electric supply and internet network resumed on the same day, well the situation can’t be the same in every disaster hit zone. The social networking site (NEPTA Facebook) helped a lot to connect NEPTA with the physiotherapists and it was equally useful to have their status through it. Since the NEPTA social network has almost 900 PTs as followers, the same platform was utilized to disseminate the vacancy announcement of physiotherapists in several organizations. In one way this method served the smooth exchange of messages on the other way it also promoted NEPTA and its commitments towards the Nepali PTs and the rehabilitation system. Hence, social networking is very useful in disseminating the information and generating quick consensus/decision at the time of disasters.

6) Summary: Derived from the recent experiences, physiotherapists should be an integral part of multidisciplinary team who should be engaged right from the preparedness to response and relief after the disasters. In less resource setting like ours, it’s equally important to build up the capacity of physiotherapists in disaster preparedness and management. Though disasters and its associated damage are always catastrophic, it is also an opportunity to flourish and prove the impact of physiotherapy services so that the national health system owns it appropriately.