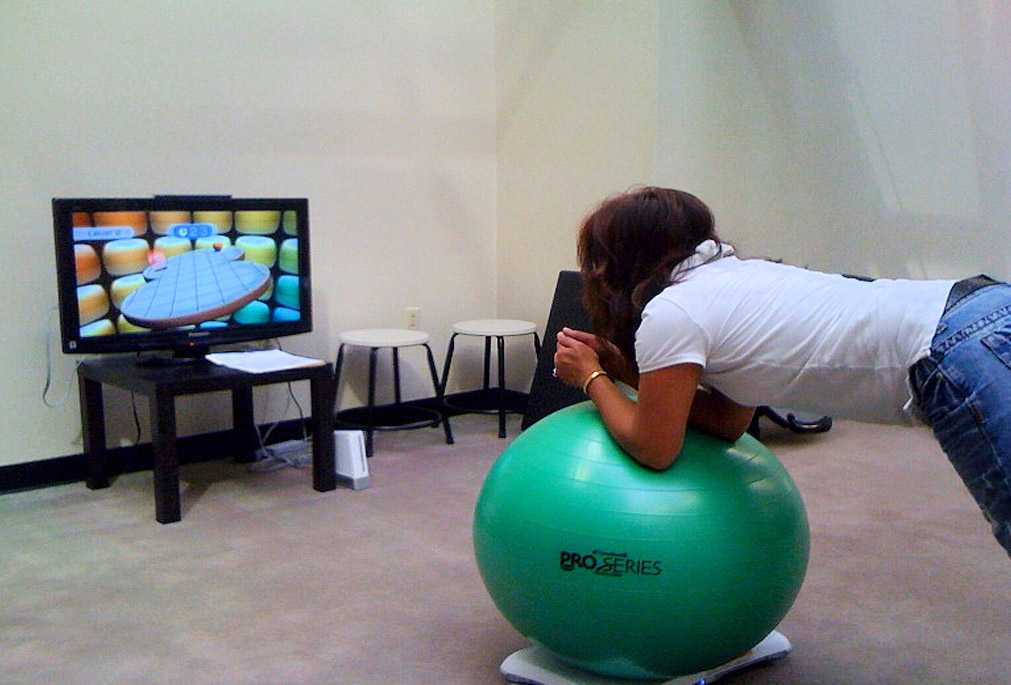 Millions of people, all ages and abilities around the world, suffer from various orthopedic ailments that may benefit from physical rehabilitation.  Meanwhile several million are investing in Wii Fit, the home fitness tool used with the hugely popular Nintendo Wii gaming system.  Now Wii fitness and rehab can be combined.  Wii-habilitation or better known as wii-hab, is the medical application of interactive video gaming devices to augment therapies of physical, cognitive, behavioral, and otherwise, under the guidance of a trained and licensed health care provider.

The origin of wii-habilitation was rooted in the discovery that motion-activated hand controllers could be used to interact with a virtual world, and for some patients, to perform physical tasks or sports that they could not otherwise perform in real life.  As early as 2007, many skilled nursing facilities and some rehab hospitals began using this technology to provide a fun addition to therapy.  In mid 2008, a couple years after the birth of the Wii, Nintendo teamed up with a Japanese engineering genius, who created the Wii Balance Board, a hard plastic board with sensors at all four corners to detect changes in balance.  Wii Fit is the product that revolutionized virtual fitness and exponentially strengthened wii-hab.  This game prior to the sequel, Wii Fit Plus, had 40 fitness games that were categorized as yoga, strength, aerobics, and balance.  It was shortly following the release of Wii Fit that at least one orthopedic physical therapist discovered a use that goes far beyond ancillary benefit from playing games.

It was only very recently that the world learned of the quality of the Wii Balance Board.  In a study at University of Melbourne, they compared the internal features of the Wii board with a popular hospital force plate balance system and found that Wii outperformed its $18,000 predecessor.  Most therapists to this day don’t comprehend the capacity of this Wii balance board system. Although wii-hab has been clinically relevant in the treatment of neuromuscular disorders and assisting the elderly with general conditioning and social interaction, the efficacy of the Wii Fit system is in the infancy stage for orthopedics and sports medicine.  One of the most useful applications for Wii Fit/Plus is to improve patient compliance.  Physical therapists recognize that compliance is quite low with traditional methods of exercise prescription.  Patients are able to acquire a Wii console for $200 U.S. and the Wii Fit Plus for another $90 U.S.  Although this cost is not pocket change, many patients recognize its importance in the long term and consider purchasing the system.  Once the patient acquires the gaming system, physical therapists can then prescribe specific exercises that are instructed in real time by an on-screen personal trainer with feedback on their specific performance.

For the very first use of Wii Fit/Plus, the user is greeted by an animated replica of the Wii balance board and walked through the basic features.  A profile must then be established for tracking the exercise habits and scores of the user.  It should be noted that unless a therapist expects very few users, I would highly suggest using a common profile for all patients.  During this process a “mii” is created—an animated depiction of the user, also known as an avatar.  Each profile that is created will require a series of tests prior to the system assigning a “Wii Fit Age”, a score that is loosely representative of your body composition and balance performance.

Once a profile is created, the training mode is all that is required from then on for patient care.  Once again, the training mode has categories and like the Wii Fit, the Wii Fit Plus has yoga, strength, aerobics, and balance.  However, this sequel also has a category called training plus—a group of 15 new exercises that are combinations of agility, coordination, rhythm, balance, and cognitive function.  Yoga exercises are at times glorified stretches but they offer something very unique—real time visual feedback of your weight transfers are displayed as a small red dot moving over a silhouette of the Wii Balance Board.  Strength exercises are mostly geared for lower body and little attention is given to the upper extremities.  Aerobics exercises include twirling a virtual hula hoop, kickboxing to the instruction of a trainer, step aerobics, and walking/running.  The balance exercises are combinations of simple lateral movements and complex multi-directional movements that may incorporate agility.

Thanks to the Wii Fit sequel, Wii Fit Plus, there are two methods to perform an exercise prescription.  The traditional method is to select the desired exercise from that category menu.  Once selected, the participant will be required to step onto the board (with very few exceptions) for the device to go through a calibration sequence.  You will notice a green circle on a white screen at this time.  In order to receive accurate feedback during the exercise, the calibration must be performed properly.  Calibration for individual exercises is simply assessing the weight of the participant as well as the placement of their mass.  If your center of mass is not in the center, the exercise feedback may be distorted.  Once the calibration is complete, the exercise will begin.  During each yoga and strength exercise, there is a display showing an outline of the Wii Balance Board and a red dot representing the shift in the performer’s balance.  Once the exercise is completed, you are assigned an overall score and ranked on a scoreboard.  The score can be vital for compliance, providing motivation for the participant to improve next time.

The second method to perform an exercise program, only available on Wii Fit Plus, is through the “My Wii Fit Plus” tab of the training main menu.  Once that tab is selected, the background is a locker room with another short menu.  Select “My Exercise Program” and continue to build a workout with a choice of yoga or strength exercises.  Once the workout is programmed and started, the program quickly transitions from one exercise to the next without reporting an overall score.  Although this mode is expeditious offers little downtime, the disadvantage is a lack of score reporting.

While some innovative physiotherapists use the Wii system as an adjunct to therapy, first glance of the Wii Fit system will show that some exercises on the menu are just too difficult for some patients.  Don’t let this stop you from using this ingenious device.  If it asks you to perform a push-up, perhaps you consider placing the Wii Balance Board on an elevated surface such as a table to reduce the resistance required by the patient to perform the exercise.  If the tree pose in yoga is too difficult, consider adjusting the position of the non weight-bearing limb or perform the pose while seated on a stability ball.  Those modifications would work fine but this system allows for nothing short of magic if you have a complete understanding of the Wii Balance Board.

Wii-hab to Wii Fit is a process that I created to modify these basic exercise games to make it more relevant and useful for your patient’s body part or condition in a progressive manner.  Although most modifiable exercises are performed with the Wii Fit, it should be noted that other video games do work for specific application.  Aside from Wii Fit/Plus, I also encourage orthopedic and sports physiotherapists to try “We Ski and Snowboard” from Namco Bandai and “EA Sports Active”.  Although many newer Wii games claim that they are “Wii balance board compatible”, there is a spectrum of compatibility.  Nintendo’s Wii Fit/Plus is perfectly compatible and that is because they created the board and the game to be synchronized.  We Ski offers excellent compatibility and like the Wii Fit, the participant’s weight shifting carefully controls the avatar.  EA Sports Active is compatible but very limited.  This fitness game offers a variety of Wii balance board compatible exercises but it can only detect which foot is on and when it is on or off.  It cannot read the exact weight shifting that some games can provide.

Another crucial part of the Wii-hab to Wii Fit process is an array of props to help modify the exercises.  I use Theraband Pro Series stability balls due to their responsiveness by the Wii balance board.  For kneeling exercises and some standing balance exercises, Theraband also makes a foot-size high density foam to challenge proprioception and protect patients’ knees.  To add resistance to the wii-mote during EA Sports exercises, you may use resistance bands or tubing.  However, a new innovative product is available that secures the wii-mote inside a weighted dumbbell.  Riiflex makes gym quality 2 pound and 5 pound dumbbells.  A few other products that I use frequently in conjunction with wii-hab exercises are the Halo, BOSU and Reebok Core Trainer.