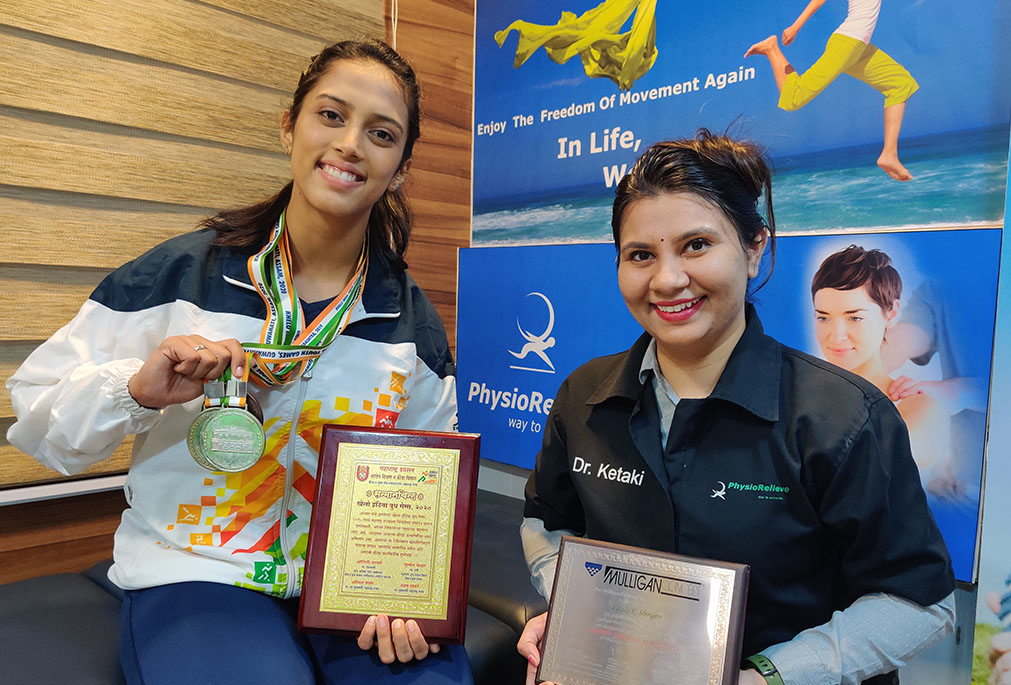 She has undertaken a lot of ergonomics and health assessment seminars at various companies such as Ambit, Tata Chemicals, Godriej & Boyce and SIDBI bank.

She has also done lectures for the staff of Grand Hyatt, Hungama channel and Intelligencia.

Poorva Sawant has been one of her regular followers since many years. Poorva’s rehabilitation has always been high demanding and she needed to push beyond her limits. Poorva aspires to win an Olympic gold for the country one day.

Poorva has been visiting frequently for minor injuries. One incident particularly has made a mark on our memories because it was just prior to her national level competition. During her practice of triathlon, (hundred meters run plus long jump plus shot put) unfortunately she has sprained her ankle. Poorva Sawant has very well -developed arches on her feet, that’s why she can run faster than many. Her ankle flexibility was also good. But she had developed calf tightness because of the immobilization done during the ankle sprain. Within a very small span of time, we had lost a lot of flexibility and strength.

After Poorva’s ankle sprain incident, her proprioception was the biggest challenge. We started slowly strengthening her muscles around the ankle and gave her a lot of positive reinforcement. Biofeedback also played a major role in proprioception reeducation. If proprioception was not brought back, there was a risk of ankle reinjury. Poorva has been competing in a lot of hurdles, high jumps, sprints, triple jumps and throws. During that year, Poorva secured silver medal in IFI nationals.

During the national competition Poorva pulled her hamstring while doing long jump and later was unable to walk. Once she was back from the national event, she had to undergo a through orthopaedic assessment for understanding the grade of the injury. Thankfully, the injury was not severe. There was not a complete tear and mostly the muscle fibres were intact. We started with a lot of rest and icing initially. The challenge was that excessive immobilization would have again caused the muscles to go into deconditioning. We could not allow her to suffer the losses of deconditioning phase again.

Moreover, because of hamstring injury walking was difficult and even climbing and decending stairs was impossible. It was a task to move her from one place to another, risking further injury. Her practice sessions had stopped completely and she was on rest since a couple of days. Once we had confirmed the diagnosis. We did not wait for the strengthening. We also started stretching the fibres slowly and steadily. Ultrasound also played a major role in the treatment. In a few days, Poorva could feel the spasm of muscle fibres decrease day by day. She was allowed to walk or run with taping. Taping protected the muscle while the strengthening still continued. We regulary maintained the range of motion at the knee and the ankle at the same time. Back mobilization also helps in loosening the hamstring therefore she used to perform back extension exercises, three sets, three times in the day.

Poorva was shifted from ice to warm compressions as soon as the initial acute phase of tissue healing was over. Surge faradic contractions were given initially to activate along with active contractions. This electrical stimulation maintained the tissue before we could load it. Isometric hamstring exercises were the only thing that she could do initially. She was progressed to active- assisted hamstring exercises. With a lot of efforts Poorva could stand and bear her own weight equally on both her legs. There was a lot of imbalance and a limp.

For the imbalance to be cured she needed weight bearing exercises, contralateral as well. Standing on one leg was initially very painful but her rehabilitation would not have been complete without that. Poorva’s daily activities were very taxing to the lower extremities. Hamstring is the crucial muscle required for long jump. Hamstring flexibility is required at the highest. Muscle energy techniques were used for bringing back flexibility as well as strength. Manual muscle testing confirmed the benefits very soon. Poorva was also given a huge home program which she included in her regular warm up and practice sessions. She was suggested a proper cool down after each session. Her proprioception training continued too during her last phase of rehabilitation.

When Poorva Sawant had finished her complete rehabilitation, she was ready to perform at the competitions. In the later part of the year Poorva became Gold medalist of the Khelo India Youth games 2019 for triple jump. Poorva has secured a hundred and twenty medals so far and has been successful in all the events. She is a proud holder of ten national medals.

Winners are never made by chance and repeated success comes only to those who strive for it each time. Poorva’s each and every match is important to her as well as us. We never let her be under prepared. Her injuries are immediately paid attention to and attended quickly. That’s why she has continued to excel and will surpass all the hurdles in the future. Her dedication and spirit need to be appreciated. Physical as well as mental strength is required to go ahead in life. Poorva also secured ninety percent marks in her tenth standard board examinatons.

This was our journey with the brightest future athlete and Khelo-India champion Poorva Sawant.