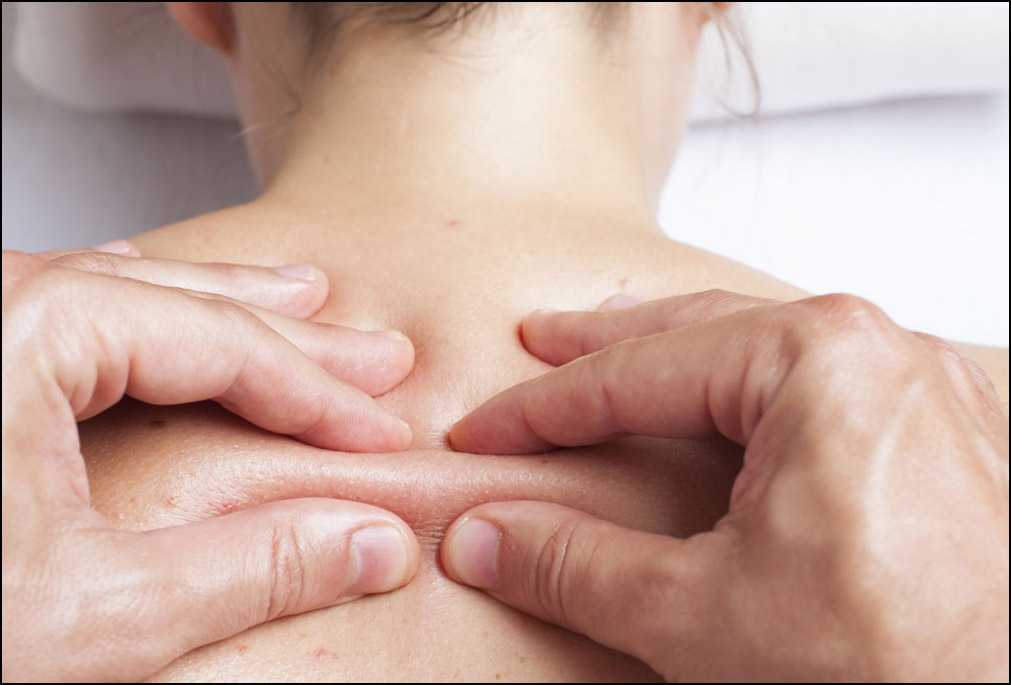 Not so long ago, we considered the muscles and the fascia as two distinct entities. As our understanding of the soft tissues evolved, we have come to realize that muscles and fascia are structurally and functionally inseparable, together they constitute the myofascia.Myofascia is a complex web of connective tissue which covers the human body extensively. The fascia gives contour and alignment to the muscles, allows smooth sliding of the muscle fibers on itself and transmits the active and passive mechanical forces.The tension in the myofascia regulates posture and movement. This tension is a factor of external forces, the mechanical properties of myofascia and the nervous system (both CNS and ANS). The nervous system receives conscious and unconscious feedbacks from the wide variety of sensory receptors from the myofascia, processes them and discharges motor commands, largely reflexive, to regulate the myofascia.

Mechanical structure of the myofascia :  To understand how to modulate the myofascia we need to study its gross structure in both micro and macro levels. Under the microscope, the myofascia can be seen as a compilation of muscle fibers aligned in the meshwork of fascia which is largely extra cellular matrix (ECM). The ECM consists of fibers of various elasticity and water rich gel like ground substances. This ground substance provides lubrication and maintains inter-fiber distance. The amount of water decides the flexibility of the fascia and in case of dehydration or immobility this inter-fiber distance reduces, producing micro adhesion. On the other hand, when subjected to mechanical energy (like manual therapy), the ground substance shows thixotrophy, which means it transforms from the gel state to a more liquid ‘sol’ state, increasing the pliability. The fibers of the ECM are interwoven to form membrane like fascial sheath in various levels. The superficial fascia is a subcutaneous fascial layer which has been compared with a loosely knit sweater. The deep fascia on the other hand is a tight sleeve of connective tissue that separates the muscle groups. Epimysium, perimysium and endomysium are extensions of deep fascia which covers skeletal muscle from inside as well as outside.

The interconnection of fascia is an interesting concept. Fascia of a muscle is continuous with its bony attachment on both ends, via tendon and periosteum which in turn connect to other muscle. This has prompted many anatomist and manual therapist to conceive that all the muscles of the body are interconnected. Anatomist and body worker Tom Myers takes this one step further and goes on to say, ‘While every anatomy lists around six hundred separate muscles, it is more accurate to say that there is one muscle poured into six hundred pockets of the fascial webbing.’ Tom Myers’ is the proponent of ‘Anatomy Trains’ theory that describes a number of myofascial meridians, which are linked muscle chains that run across the lines of tension. Various other theories of myofascial chains also exist. Because of this interlinking nature of the myofascia altered tension in one part of the body can be mechanically transferred to a different region and produce symptoms. The tension lines also hold the body together like a rope that holds a tent upright. The bones can be compared to the poles of the tent and the myofascia as the fabric. Optimum tension throughout the rope is essential for the correct shape of the tent, any extra tension or slack in any one part of the tent will affect the fabric (either stretched or shortened) in that area and the tent as a whole. This happens in human body as well, where a tight calf muscle can either produce tightness of hamstrings or produce back pain, or, via tendo achilis and calcaneal periosteum, can produce tight and painful plantar fascia. This property of tensional integrity of the myofascia is known as tensegrity. The adjoining figure shows a simple model of tensegrity, where the bones (pencils) float in a sea of soft tissue (thread) tension.

Neural structure of myofascia :  Myofascia is widely connected to the nervous system. It exerts command via motor neurons and receives feedback through a myriad of receptors placed in it. Robert Shleip, in his article ‘Fascial plasticity- a new neurobiological explanation’ writes, It commonly comes as a big surprise to many people to learn that our richest and largest sensory organ is not the eyes, ears, skin, or vestibular system but is in fact our muscles with their related fascia. Our central nervous system receives its greatest amount of sensory nerves from our myofascial tissues. Myofascial receptors can be the hidden buttons that unleash immediate changes in the myofascia by altering the afferent impulses.  Shleip points out four types of mechanoreceptors present in the myofascia which can be modulated by manual therapy. They are the Golgi receptors, Ruffini organs, Pacini corpuscles and interstitial receptors. The Golgi present in both myotendinous junctions (Golgi tendon organ) and ligaments and joint capsules (Golgi end organ) responds to slow stretch by active contraction. The effect of passive stretching on Golgi is doubtful at best.

Both Pacini and Ruffini organs are present in deep fascia tendon, ligaments, aponeuroses and joint capsules. Pacini detects sudden changes in pressure like HVT or vibration and are responsible for kinesthesia. Ward and Koliha noted,” Stimulating Pacini receptors can help your clients reset these sensors to provide more accurate information and new movement options.” The Ruffini on the other hand is most responsive to slow and deep manipulations, especially tangential or lateral forces. Stimulation of Ruffini reduces the sympathetic tone and produces both local and global relaxation. The interstitial receptors are the most abundant; they are found everywhere, although their concentration is maximum in periosteum and attached structures. Stimulation to these receptors bring about changes in blood pressure and blood flow via ANS. Deep pressure on interstitial receptors have been reported to drive fluid from blood to interstitial fluid, helping gel to sol transition of the ECM. Apart from these four mechanoreceptors there are other neuronal pathways that can be modulated. Any of the common facilitation and inhibition techniques used on the neuro rehabilitation can be used purposefully. Use of proprioceptive, extroceptive, vestibular, special senses, autonomic & multi sensory stimulation are common. For example, thermoceptors are routinely used to produce relaxation and reduction of tone via local heat application whereas the use of eye movement to reduce muscle stretch is advocated in MET. Also, because of the intricate link of myofascia with the autonomic nervous system, breathing modifications can be further used to facilitate the modulations.

Myofascial dysfunction :  Any musculoskeletal pathology affects the myofascia. In acute conditions the common response is localized protective spasm which may lead to pain-spasm-pain cycle if the underlying pathology does not resolve and add more discomfort. The scenario is slightly different in a chronic condition, which can be injury, overuse or just habitual poor posture. Over a period of time the myofascia tries to remain functional by compensatory adjustment. The stresses may be shifted distant to the original location via the myofascia meridians. All these adaptations change the feedback from the myofascia which in turn produce altered motor commands. Shortening or elongation of the myofascia also changes the length tension relationship and the efficiency of the muscles reduces.  Furthermore this predisposes the body to injuries. A mild trauma which is otherwise trivial may now produce significant consequences.

All roads lead to Rome:  When dealing with myofascial work a therapist is spoilt with choices. In fact all the manual therapy techniques potentially address the myofascia to some extent. The techniques have developed over great many the years in various geographic locations, thus they sometimes overlap, and sometimes contradict each other. Stretching, massage and myofascial release are three of the oldest and most direct approaches available. They tend to produce as much mechanical changes as neural on the myofascia. Facilitated stretch, PNF stretch and MET (muscle energy technique) are almost similar forms of stretching which uses patient’s own effort. Most of these techniques involve voluntary muscle contractions against a resistance (concentric/eccentric/isometric) to produce GTO mediated inhibition in tonus, followed by passive/ active assisted stretch of the myofascia. Theories of post isometric relaxation (when contracting the muscle that is being stretched) or reciprocal inhibition (when contracting the antagonist) is traditionally used to explain the immediate gain in range. Chaitow has mentioned role of endocannabinoids improving stretch tolerance as another potential mechanism. A number of variations of this basic theme with eye movement, breathing, strength and duration of contractions are available.

Dry needling, the recently popular treatment for myofascial dysfunction pierces the skin overlying pathology. The advantage of dry needling is it can reach myofascial structures which are otherwise inaccessible. Dry needling can produce mechanical, chemical and biophysical effects on the myofascia. Positional release techniques are a set of techniques which hold the dysfunctional myofascia in the shortened position instead of lengthening it, following this hold the dysfunctional tissue is slowly brought back to the normal length. This resets the muscle spindle to its normal length from a pathologically shortened position. Certain joint mobilization techniques appear to affect the myofascia via the mechanoreceptors e.g.  high velocity thrust can affect the firing of Pacini corpuscles. Mulligan mobilizations traditionally explained by ‘positional faults’ theory may also have some mechanoreceptor induced neurophysiological modulation, suggested by Paungmali et al in a 2003 paper.

Therapeutic taping, wrapping and bracing, although have a wider purpose, can be used to either facilitate or inhibit parts of the myofascia. Generally a tape parallel to the fibers tends to facilitate whereas an arrangement going across the fascia inhibits the tonus. PRT taping and MWM taping can maintain their individual treatment effects for a prolonged duration which allows myofascia time to adapt.Self exercises like Yoga, Tai Chi or Pilates involve stretching and static and dynamic exercises. They produce an increased awareness of the body as a whole and allow trained practitioners a greater control over the myofascia.The electrotherapeutic modalities too can be used. From the modest superficial heating agents to laser, all can be strategically used to bring about change in myofascia.

To conclude : Myofascia is a continuous entity, covering the whole of the human body. Good myofascial tensegrity is essential for efficient posture and movement whereas myofascial shortening or slack produces myofascial dysfunction. The effects and symptoms due to these may appear elsewhere as the stresses get distributed throughout the body via myofascial meridians. Myofascial modulation aims to restore the normal tensegrity by utilizing mechanical, sensory and contractile properties of the myofascia.