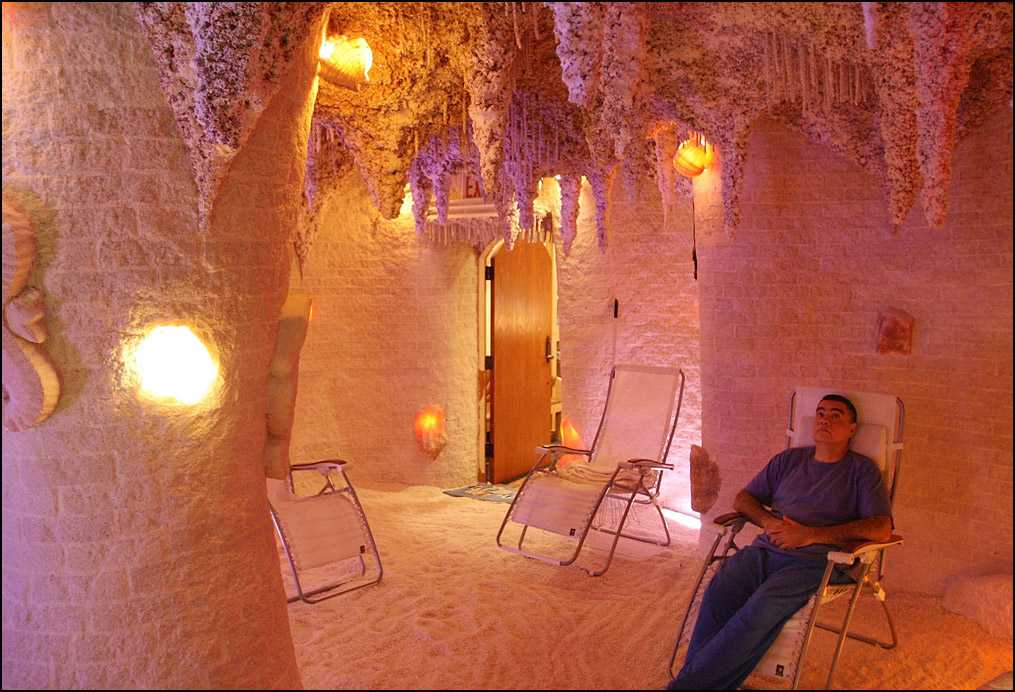 Salt therapy was discovered in the mid 18th century by Polish health official named Felix Botchkowski. Salt therapy was originally discovered as Speleotherapy or cave therapy, 'Spelenos' being the Greek term for 'cave'. Felix Botchkowski found that salt miners in Poland had not experienced lung-related ailments such as asthma, pneumonia, or chronic bronchitis. Even miners who had respiratory disease before they began working in the mines felt better and had fewer symptoms as they spent more and more time in the caves. Felix Botchkowski published a book in 1843 on his findings. His predecessor Mstislav Poljokowski founded the first Salt Spa in Velicko, which is still in operation today.

The benefits of salt were also noticed in the 1940's, around the end of World War II. Abandoned salt mines were frequently used as bomb shelters. Those who sought safety in these mines found a reduction in respiratory symptoms. Soon after, salt sanatoriums opened in European countries such as Germany, Hungary, and Yugoslavia. In 1968 the Hospital of Allergic Diseases officially authorized the scientific foundation of Spelenotherapy.

Speleotherapy is the treatment of respiratory diseases, as well as some skin diseases, utilizing salt-rich air in underground caves. Natural salt microns and ions have been proven effective in calming an agitated respiratory track. Salt has a natural anti-inflammatory effect; it reduces swelling and edema in the air passages, making it less difficult and less painful to breath. Inhaling the salt-saturated air destroys fungus and bacteria in the mucosal lining of the respiratory tract. Breathing the salted air thins the mucous in the lungs so it is more easily expectorated. It has also being proven to remove remaining tar from the lungs of smokers. The salt ions produce a negative electrical charge in the air, which improve mood, reduce stress and anxiety, decrease fatigue, and have many other curative effects.

During a treatment, the patient is allowed to relax in the salt cave for the duration of the session. Each session last from twenty to forty five minutes, and is repeated daily for up to fifteen days. Treatments are recommended up to three times per year. Speleotherapy treatments are typically not private; patients usually can share a treatment cave with as many as thirty other individuals. Outside the caves, salt therapy is called Halotherapy. It comes from the Greek word 'halos', a term meaning 'salt'. Halotherapy is essentially a replication of Speleotherapy, using a dry aerosol spray to coat the walls and ceiling of a room. Man-made salt rooms allow the opportunity for a private session, but larger salt room are built to accommodate many more patients.

Halotherapy can also be used privately at home. A device called a salt pipe, a personal dry-salt inhaler, can be used daily for up to twenty five minutes. An air salinizer is another way to gain the same benefits of salt therapy. They negatively charge the room in the same manner as a salt mine. "The Salin device is a bionic air purifier, natural ionizer and salinizer that uses forced ionization of the indoor air by salt sublimation (places tiny micro particles of salt into the air). The salt micro crystals are under 5µm diameter, with a majority under 1µm and are able to penetrate deep into the lung." Salt lamps are also an easy way to change the electric charge in the room. The heat from the light bulb or candle inside the lamp sends off the negatively charged salt ions. This cleans the air in the room. The salt ions cling to airborne allergens making them heavy, allowing them to fall out of the air so they don't get breathed in. The negative ions improve mood and reduce stress and anxiety.

Speleotherapy and Halotherapy have been effective in reducing symptoms in many areas of health. Although treatments are most used to remedy lung-related disorders, salt has also been used to care for skin conditions, anxiety, stress, ENT illnesses, and has been utilized to improve the immune system.

Salt therapy falls under the class of physical therapies. It is a non-invasive, natural therapy without the side affects of drugs normally used to treat these ailments, such as corticoids or steroids. The absence of these drugs allows this treatment to be safe for pregnant women, and even very young children. Children that receive this therapy inhale a lower concentration of salt air.

An easy way to integrate salt therapy into a massage practice is with salt lamps. Although the salt lamp isn't nearly as strong as an underground Speleotherapy treatment, it still reproduces similar effects. In addition to having curative factors, salt lams also add a relaxing ambiance to a room. Utilizing air ionizers could also be a medicinal addition to the atmosphere of a massage practice. Although both these devices produce very beneficial outcomes, there is a downfall to both: the effects of these products are localized to the room. For a practice with several rooms, several devices will be needed to treat the entire office.

As a health care practitioner, the use of salt is very beneficial to my clients, as well as myself. It's important that my clients enter a pure environment, and leave feeling better than when they arrived. Being that salt is a natural mood elevator, stress reducer, and offers respiratory relief, salt lamps and air ionizers is a wise choice and a good investment for both my home and office.