An Overview of Acupuncture Analgesia Physiology by Jonathan Hobbs 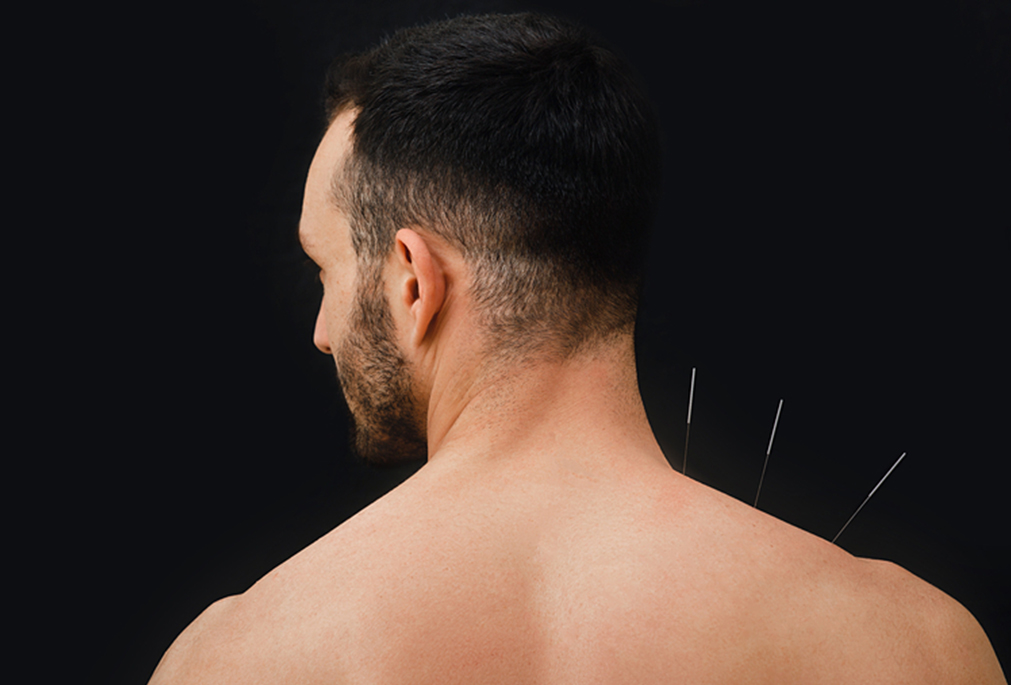 Since the early research into the physiological mechanisms of acupuncture analgesia (AA) began towards the end of the 1960’s (Zhao, 2008) there has been a persistent increase in its overall usage with an estimated 14 million plus individuals regularly utilising acupuncture by 2007 (Burke et al, 2006). Although there is a documented growth in the usage of acupuncture, there continues to be considerable debate as to its value and the nature of its proposed mechanisms and their relevance to clinical application (Colquhoun and Novella, 2013). The early work of Price et al (1984) acknowledged that psychological factors such as expectation and belief affect the placebo response exist within acupuncture analgesia, but Zhao (2008) reported that acupuncture’s analgesic properties have a neurophysiological underpinning.

During acupuncture and dry needling (DN), a narrow-gauge filiform needle that may typically range between 0.16 and 0.35mm in diameter, is inserted into the body to stimulate both proposed local and systemic effects. The insertion of a filiform needle into skeletal muscle tissue has been shown to stimulate A delta (Aδ) or Group III small diameter myelinated primary afferents in the skin and muscle (Pomeranz, 1987). Early animal studies demonstrated that the stimulation of Aδ fibres had significant effects on inhibition via the spinothalamic tract that in a primate model of pain (Chung et al, 1984). Following insertion, the needles are manipulated either by rotation or repeated penetration into the underlying muscle fibres, creating localised trauma and strong mechanical stimulation. The level of manipulation dictates stimulus level (Zhao, 2008). The numbness, heaviness and distension experienced during the mechanical stimulus of needling of deeper tissues is thought to be attributed to the stimulation of a combination of A Beta (Aβ) and Aδ fibres (Zhang et al, 2012). The trauma caused by needle penetration and manipulation also triggers an inflammatory response stimulating the release of a variety of proinflammatory mediators.

Shinbara et al (2017) concluded that adenosine may also have influence on acupuncture’s analgesic effect by assisting with the removal of algetic substances. It has been suggested that due to its role in the increase of local muscle blood flow acupuncture may also have a role to play in tissue healing (White et al, 2018). During acupuncture needling C fibres that are responsible for aching pain are also stimulated (Pomeranz, 1987).

C unmyelinated fibres have a slower conduction and are responsible for a dull, more burning, aching, throbbing pain and are usually felt after the initial sharp stimulus of needle insertion (Wilkinson, 2001).

C fibres are thought to contribute to the overall analgesic effect generated by acupuncture and the associated phenomenon of “De Qi” (De-chee) as they give rise to a feeling of heaviness and soreness (Wang et al, 1985; Wang et al, 1989).  Since the seminal work of Pomernaz and Chiu (1976) numerous studies have shown that acupuncture analgesia in both humans and animals can be reversed or abolished by naloxone, the opioid receptor antagonist.

This process suggests that acupuncture’s mechanism is opioidergic. There has for a considerable time existed evidence to demonstrate there is also an involvement of a number of monoamines, including noradrenalin, serotonin (5HT), dopamine and substance P (Han & Terenius, 1982). It has also been shown that when a nerve is blocked by local anaesthesia that acupuncture is ineffective in the region innervated by that nerve. The suggestion follows that acupuncture effect is being transmitted via neural pathways (Stux and Hammerschlag, 2001; Stux et al, 2003).

Langevin et al. (2001a, 2002) demonstrated that the manipulation of the needle via rotation leads to the needle grasp sensation associated with acupuncture and a subsequent mechanical coupling of the needle and its surrounding connective tissue. This phenomenon is considered to transmit signals to the adjacent connective tissue cells via mechanotransduction and support acupunctures proposed therapeutic effects (Langevin et al, 2001b). Evidence suggests that significantly greater C fibre stimulus is elicited in superficial and deep mechan orecptors through rotation than is achieved with thrusting, flicking or scraping the needle (Zhang et al. 2012). 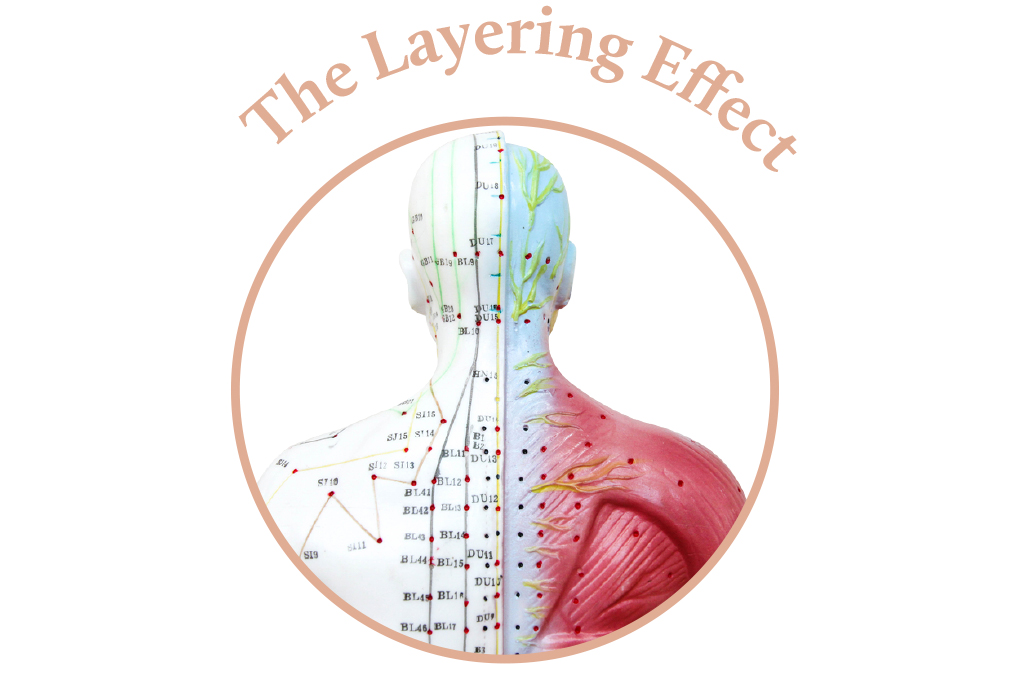 When acupuncture is performed in a region close to the site of pain or tender points within the local soft tissues, both local inflammatory response and segmental circuits operating within the same spinal cord segment are utilised as the primary analgesic mechanisms (Baeumler et al, 2015). The addition of distal needling may contribute to a more profound activation of stimulus to the supraspinal regions of the central nervous system.

By combining the documented benefits of the segmental and local effects of needling with that of distal needling it is proposed that the overall effect of acupuncture may be enhanced (Bradnam, 2007a, Bradnam, 2007b). This concept of layering effect is considered to create the potential for widespread analgesia throughout the body (Stux and Hammerschlag, 2001). Therefore, local segmental needling usually gives more intensive analgesia than distal non-segmental needling does because it uses all three centres. Distal points are less likely to fall within the same segment, although this does occur in some cases. A study conducted by Srbely et al (2010) demonstrated that by needling an area of myofascial pain defined as a trigger point there was a short term anti-nociceptive response in an adjacent muscle, therefore concluding that there was a segmental mechanism of analgesia in effect.

The work of Baeumler and colleagues (2015) also supports the conclusion that pain threshold changes with EA are mediated via segmental inhibition at segmental level within the spinal cord. Another study examining needling for myofascial pain demonstrated that distant myofascial trigger points could reduce the irritability of painful areas in more proximal muscles within the same myotome via the proposed mechanism of segmental spinal cord inhibition (Hsieh et al, 2014).

A study examining neuropathic pain in a spinal nerve ligated rat models demonstrated, using naloxone, that the opioid system was involved in the acupuncture reduced hypersensitivity. Acupuncture also displayed a similar efficacy to gabapentin there was no subsequent increase in tolerance with continued treatment suggesting its positive potential role in the treatment of neuropathic pain. (Cidral et al, 2011). 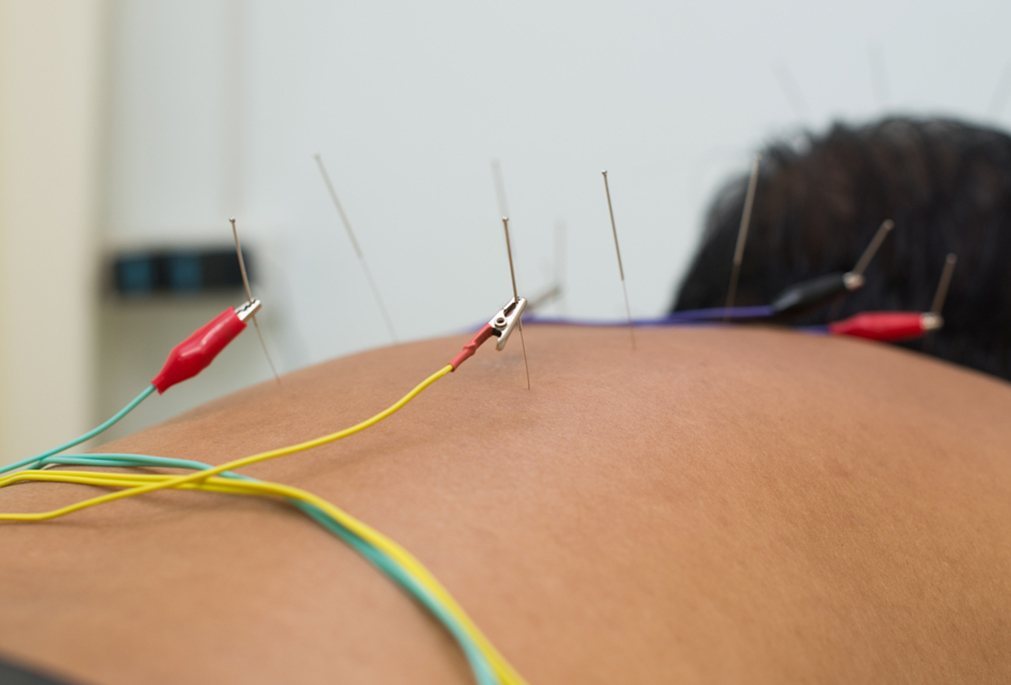 The heterosegmental effect of needling is brought about by a neurohormonal mechanism involving the release of beta-endorphin and the two descending neuronal mechanisms which are serotonergic and adrenergic. There is also considered to be some involvement of diffuse noxious inhibitory control (DNIC) in the overall analgesic effect where one pain may inhibit another (Filshie and White, 1998).

A systematic review and meta-analysis of trials for acupuncture for non-specific low back pain concluded that both sham and placebo acupuncture were more efficacious than routine care or waiting list (Xiang et al, 2017). Wang et al, (2014) reported that since 1975 to 2014 more than 10 000 randomised controlled trials on acupuncture had been published. Lu et al (2022) identified 2471 systematic reviews published between 2000 and 2020 to explore the usage of suggested beneficial acupuncture therapies in clinical practice and health policy. The conclusions they drew from the evaluation was that there were a large number of methodologically rigorous systematic reviews of acupuncture, but clinical practice and health policy was prone to underuse these beneficial therapies, in spite of the documented high or moderate certainty evidence.

The Acupuncture Trialists’ Collaboration (Vickers et al, Pain. 2018) conducted a systematic review of 39 high quality RCTs that evaluated the use of acupuncture or dry needling for chronic back and neck pain, osteoarthritis, chronic headache, and shoulder pain. The review included a total of 20,827 participants and the authors concluded that verum acupuncture was superior to the sham and control groups, acupuncture is effective for the treatment of chronic pain, with treatment effects persisting over time and that decreases in pain following needling cannot be explained solely in terms of placebo effects. The conclusions drawn from this systematic review informed the decision-making process within the NICE Guidelines for Chronic pain in over 16s within the UK (2021). The guideline recommendations were to consider offering acupuncture or dry needling for chronic primary pain in a primary care setting for a maximum of five treatment hours in total delivered by healthcare professional from NHS bands 5-7.

With breakthroughs in investigative research and deeper understanding of neurophysiology there continues to be new evidence highlighting the underlying mechanisms of acupuncture and the potential benefits from it’s clinical application. Some of the more established mechanisms of acupuncture analgesia have briefly been touched upon in this article but acupuncture’s physiological effects are proposed to be much broader. Outside of the spectrum of myofascial pain evidence exists for the use of acupuncture in the treatment of nausea, headaches, migraines, and overactive bladder to name but a few (Carlsson et al, 2000; Linde et al 2016a; Linde et al 2016b; Wang et al, 2012). With further research still, a more profound knowledge of mechanisms and application surely awaits.